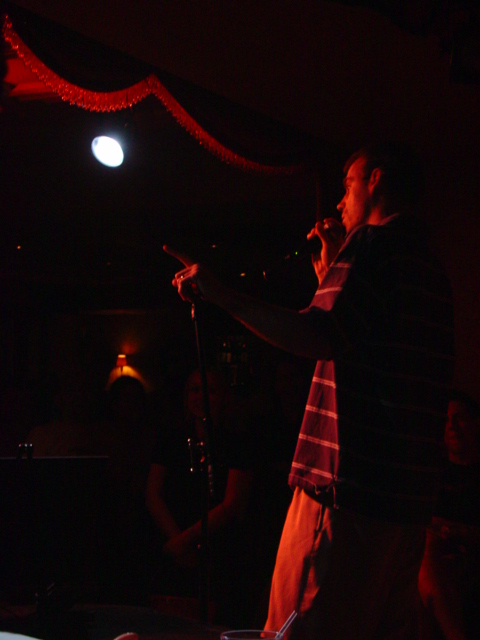 Photo by Matt Bellman! God bless the fine people at First Person Arts for inviting me back for a guest storytelling spot, merely a month after my glorious win at the March slam. I actually kind of nudged them into picking me for this month's theme, as I told 'em I was a zookeeper and I had a bunch of stuff prepared. It worked!

I had a potential conflict in a softball game that was already scheduled for the same night, but luckily I was able to fenagle the last slot of the night ("you'll go on as they're tabulating scores to figure out the winner", they told me). Sweet. AND, there was also another guest slot, so I was also just one of two guest storytellers. Even better - dilute the pressure a bit. They even put both of us guest storytellers' names on the slam's ad in the City Paper! Sweet. 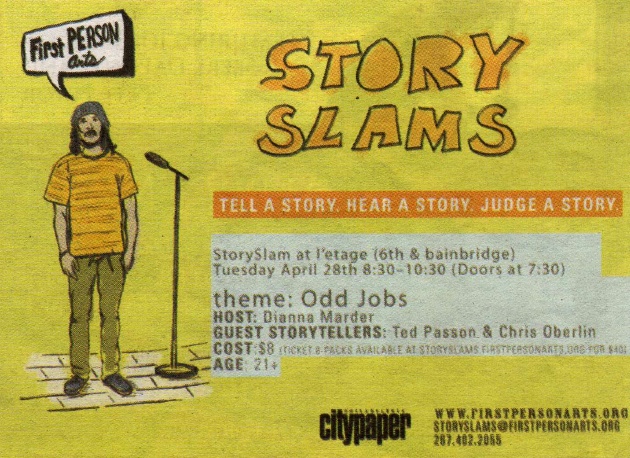 The BEST part of being a guest is the guaranteed slot. No anxious knee-knocking awaiting the call, hoping you get pulled from the bucket. I prepared almost as much as I did for last month's, but there was a calmness there that sort of settled in. Plus, I could invite friends with the promise of actually seeing me on stage, which I couldn't guarantee before. A few folks from work came to cheer me on! Yeah! And, they were awesome enough to get there early and save Steph and I seats, as we were gonna be cutting it close on time. What up, Sam & Matt! (And Andrew and Kate!) 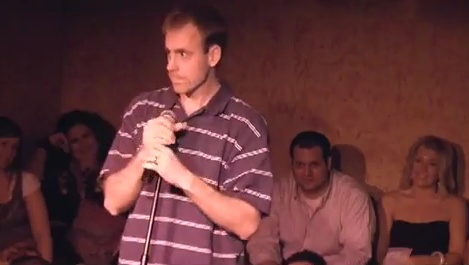 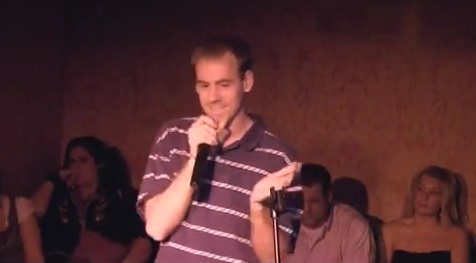 The game finished in good time and Steph and I were able to arrive before everything got going. I got to meet Andrew, First Person Arts' communications guy, in person, which was nice. Cool dude. I got introduced to the host of the night, an Inquirer writer named Dianna Marder, and then Dan the scorekeeper asked me if I wanted to go on first. NO. heh. Apparently the other guest was hoping to not go first, but luckily I got first pick - of not going first. 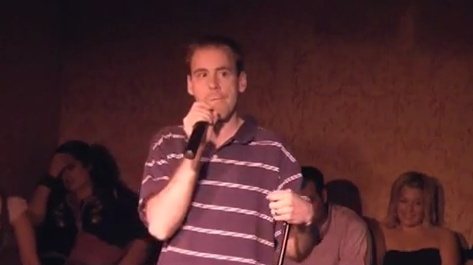 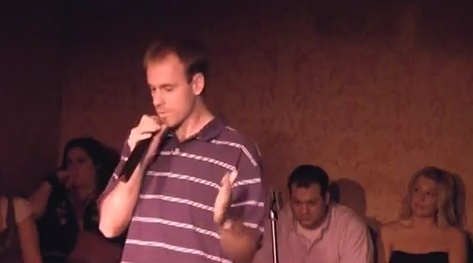 The good thing was that my story had some pretty funny stuff in it, but the bad thing is that it wasn't really "one" story - there was no real plot line to it other than there were "sort of" segues to connect it together. It was kind of a "best of" my occupational repertoire, heavy on zoo stuff. I would have went to this slam to tell this story had I not gotten picked or didn't win last month, so another good thing was that I didn't have to get judged for this one. There were some REALLY good stories at this slam. Overall - much, much better than last month. And plus, I had way too much material and went ridiculously over time. 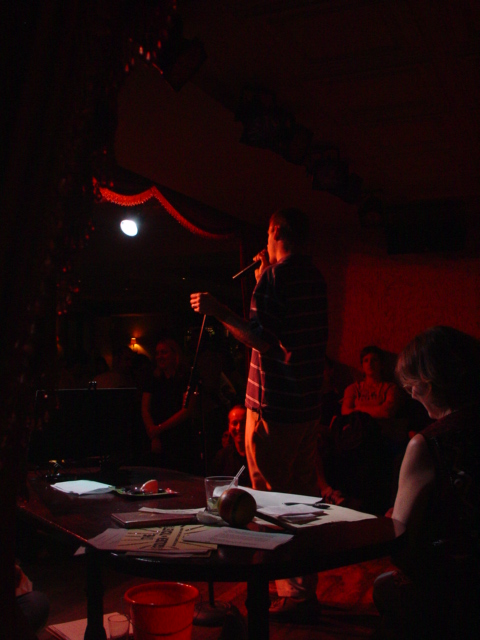 Like, twice the time limit. I had no idea! I knew I was gonna go over. The benefit of being a "guest" is that you don't get judged. So the time limit was merely a suggestion, and there could be no hazing for going over. And I took full advantage. But even as I was doing it, I didn't realize it was a full TEN minutes long! I typed my story all out and edited it down to a little less than a page and a half. And seeing as how my last one was a full page and went almost 6 minutes, I thought I might go about 8, maybe. 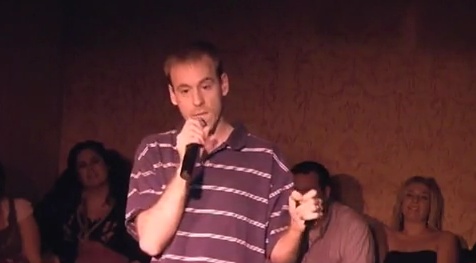 It was so long that when they put all the story videos on YouTube (including the other guest), mine was not included! I was worried I went too long, or they ran out of tape, maybe they didn't want to give anybody any ideas about going so damn long. heh. I sent a quick email to Andrew, he replied that the length was causing some file conversion issues! doh. He got it uploaded a few days later. Whew. 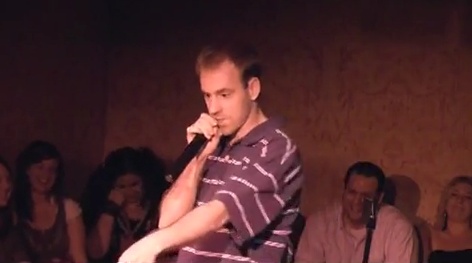 http://twitter.com/FirstPersonArts/status/1645215603
Chris Oberlin is closing the night with a guest story about working at "a local large zoological institution."

http://twitter.com/FirstPersonArts/status/1645244714
This is pure monkey shit all the time! 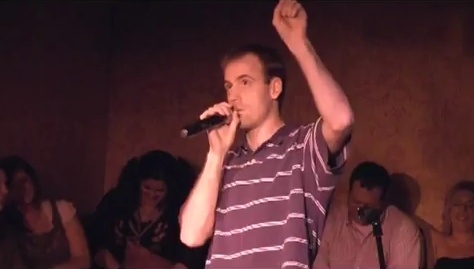 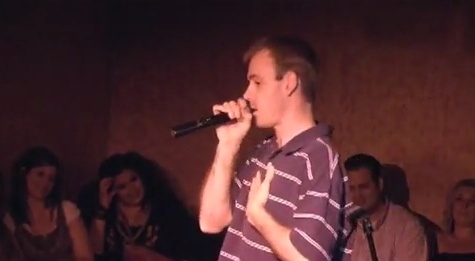 They put my video in their blog, as well. In the weeks in between storyslams, they usually highlight one every day or so during the week, and on May 22nd, mine got this blog treatment: "Morning Slam: Chris and the Animals - Chris Oberlin told a guest story at the "Odd Jobs" StorySlam last month that chronicled all of the ways a zookeeper can be humiliated by his charges. Let's just say they pale in comparison to scooping cat litter." 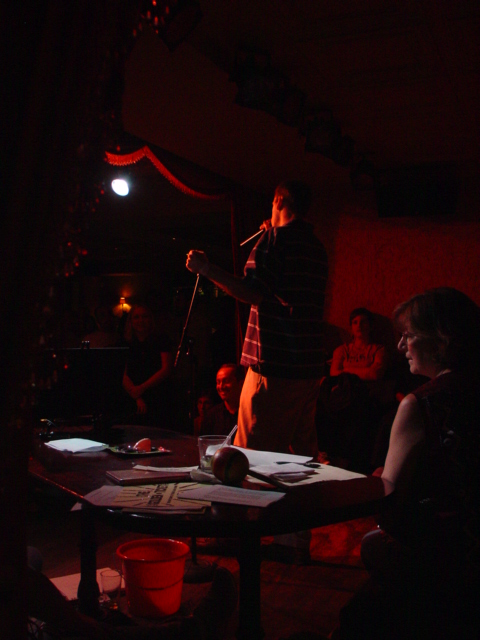 A couple weeks after I guested, every past storyslam winner was invited to a meeting at First Person Arts' center city offices. They wanted our opinions on everything from the way the slams are run, to their frequency, to the judging, to the possibility of adding more or different events, to future storytelling opportunities, etc. There was pizza and beer (and sprite!) and about 20 of us there. It was interesting, to say the least. I am now part of the "Golden Ticket Society" and have the chance to host, guest storytell or guest judge at future slams. 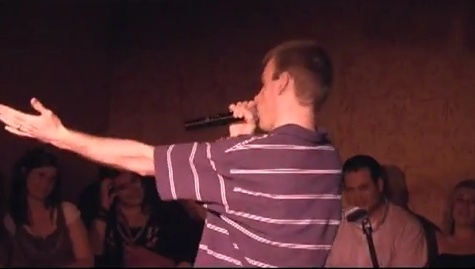 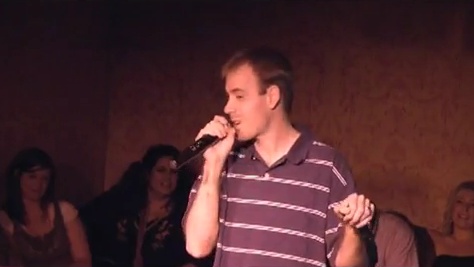