The Duke Lemur Center is kind of a big deal - at least in primatology circles. They have a shit ton of highly endangered animals (and even some cute ones) and do some good research there, too. They regularly farm out animals to zoos (including ours, repeatedly), and various co-workers of mine have visited the DLC over the years to learn more about species we take care of, some of which are... special. But I'd never been, and I'm the most senior lemur keeper who hasn't, so when our main lemur keeper needed a co-pilot to take an aye-aye back down to North Carolina (and bring a different one back with us), I said sure. Down and back, three days, all meals provided. Sweet!

Nicely done aye-aye logo, which they put on fucking EVERYTHING.

This is a bush baby, also called a galago. It is not a lemur. They're from Africa. Not sure which species, but ironically, I think it's from the Otolemur genus.

They have a ton of dwarf lemurs and mouse lemurs, and they're housed in these bizarro, condo-like, mini-maze raceways. And that's Desiree. 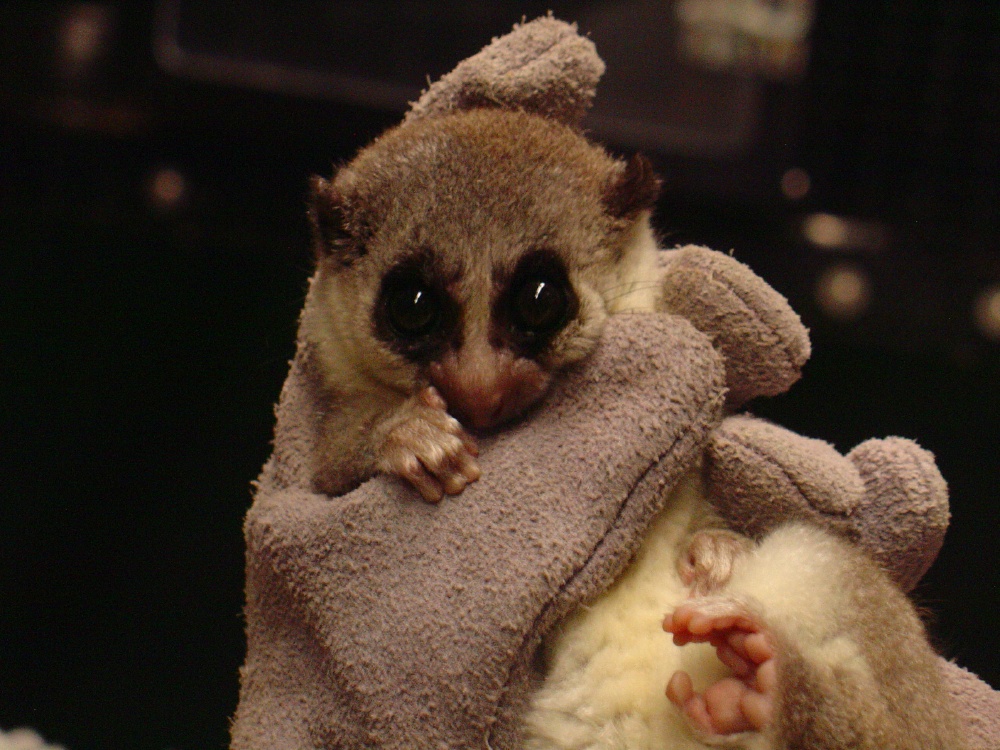 Under glass, being weighed. Photo by Des.

Their fat-tailed dwarf lemurs are all named after... birds? Yep.

This is the male of their only pair of red-bellied lemurs, which are rare in captivity. Never saw one of these before. One of the Eulemur species ("true lemurs", brown lemurs, Mongoose lemurs, black lemurs, etc). Not the best representative picture.

We made our way to one of their large, free-ranging outdoor enclosures - they have several, most of them multiple acres. But the lemurs hear you coming, and they're waiting at the door. Sifaka here.

Then the ringtailed lemurs show up, and the sifaka go up and out of their way.

Then the technicians go out into the enclosure to spread out their lunch, and the ringtaileds follow in a line, which is fucking adorable.

OB and the RTL. Photo by Des. Dopey look by not drugs.

How many sifaka can you find? This is a favorite shot, as even though they're very arboreal, when the staff is around they spend most of that time on the ground, because that's where the food is. So this was cool to see them using the trees. And they do eat plenty of native fauna, including the sifaka's favorite - poison ivy?! Yep.

The shaved part of the tail is for ID purposes.

OK, this is a great picture. By Desiree.

A black lemur! Cool. The female of their only pair and a close cousin of the blue-eyed black lemur (but very different looking!) that we have at our zoo. This was on my priority list, so I was psyched to see them. They're freaky. And old as shit (at least this pair). This is the female, obviously enjoying whatever snack that was. Kismet with the tongue out.

I don't even know. A chalk-drawing of an aye-aye (spectacularly done!) at the place we were staying, on their grounds (see below). It was there when we got there.

The log cabin (literally) we slept in. Photo by Des.

Because of course that's the address.

More ringtailed lemurs (they have a few) in a different enlcosure, with a pair of red-fronted brown lemurs, which are pretty cool. Both with previously injured/shortened tails. Bummer.

The male red-fronted. Too cool.

Me and the rufus. Via Des.

Kid-drawn signs around the grounds. Cute.